I highly encourage anyone who missed the Games this year to consider going next year. Camp Butner has a beautiful range, and pulling targets in the pits is certainly an experience.

After the morning matches, the CMP set up a store with rifles, ammunition, and other items for sale. Plus, we got to rub elbows with a few celebrity shooters: members of Team Hornady were there along with GySgt R. Lee Ermey.

The accompanying photo was published in The Daily Reflector along with this short write-up:

Garand matches at Butner are shot on a 200 yard range using the full-sized SR target. You can also shoot your 1903A3 or other vintage military rifle in this same match. The Swiss K31 seemed a popular choice among the foreign military rifles. Other matches were set up for the M1 Carbine match and rimfire rifles. 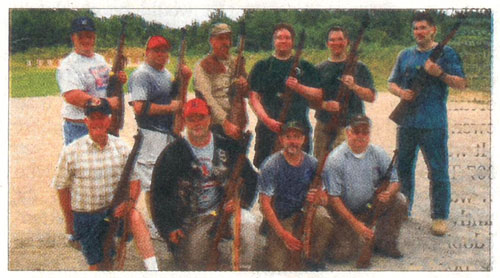