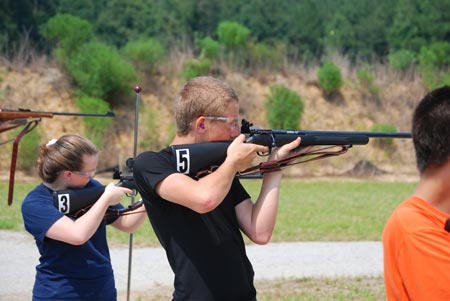 DEGS is a CMP-affiliated club and hosts rifle matches that adhere to the most current version of the CMP rules. The matches are shot on a 100-yard range, so the reduced SR-1 target is used. The course of fire consists of 35 rounds and follows the “As-Issued Military Rifle Match Course A” in paragraph 9.2.1 of the CMP rulebook:

Highest-scoring shooters in each match earn bronze, silver, or gold CMP achievement pins. Special awards are sometimes given to Junior shooters. And in 2010, DEGS initiated the annual John Wallace Memorial Garand Match in remembrance of the charter member and historian who provided the club with so much guidance and inspiration in its first year.

We have two primary classes: Vintage Military which includes just about all service rifles made prior to 1954, and Modern Military which includes recent service rifles such as the SKS and AR-15. Rifles in these classes must comply with the as-issued CMP requirements, but anyone is welcome to participate in the matches using any rifle in our Open class. As long as it is safe to shoot, it is welcome on the firing line. For our John Wallace Memorial Garand Match, shooters must use a Garand to be eligible for the cup.

DEGS adheres to the CMP’s “as-issued” rules, meaning that competitors must use service rifles just as they were produced and issued by the U.S. government. No special match conditioning other than “careful assembly of standard parts,” as stated in the CMP Competition Rules. Also, all ammunition must be military surplus or equivalent, whether purchased at the match or not. Shooters using reloads are welcome.

You don’t have to own a Garand (or any rifle, for that matter) to participate in a DEGS match! Just contact the club and someone will arrange for you to borrow a rifle for the morning. And once you get out to the firing line, an experienced club member will gladly help you through the match and make sure you feel confident with each stage of fire. Shooters need not join the club to participate in matches, but according to CMP rules (4.2 & 4.3), all shooters must  bring a notarized Eligibility Affidavit & Liability Waiver to their first match.

Anyone who wants to familiarize themselves further with the organization of how we run a match can download a copy of our range commands. They'll give you a complete, step-by-step walkthrough of what to expect.